Image by Georgia Koch at http://www.bastetandsekhmet.wordpress.com

One thousand, three hundred and twenty-four days have passed since Maggie last went out in the boat.

Every day she comes down and sits silently in the grounded boat, now mossy and falling apart. Sometimes she cries.

One thousand, three hundred and twenty-four days ago her husband died. Oh, how they’d laughed and spent many a wonderful afternoon floating around in that little wooden boat.

Maggie watches Jim and Florence nearby, pushing their boat into the water. They’re arguing about where the ropes should go. Jim raises his voice, Florence rolls her eyes. They don’t realise how lucky they are.

Friday Fictioneers is a challenge set by Rochelle each week where writers from around the world post 100 word stories based on a common photo prompt. For more information, and to read other stories, visit Rochelle’s page here.

The black sheep of the family (Friday Fictioneers)

This week I’ve written a reply to Mr Binks’ story Docked Her which can be read here (Mr Binks did this with my story last week… and oh what fun it can be!)

Image by Ted Strutz at http://tedstrutz.com/

She wanted to tell her father. But there was never a good moment. If he wasn’t at the dental surgery he was away fishing on the high seas.

Dad was a dentist and a fisherman. Just like his father. And father’s father.

But she wanted something else. He just wouldn’t understand.

END_OF_DOCUMENT_TOKEN_TO_BE_REPLACED

More money, more problems: why I don’t want to win the lottery.

‘That’s the most ridiculous thing I’ve ever heard.’ That’s husband Bill speaking and if you’re following my writing you’ll know it’s something he says often. Especially to me.

We are sitting at the table and Bill is hunched over a 10-number auto pick ticket with a pen, marking off the lottery numbers that have just been drawn.

His eyes bug out of his head. ’70 million dollars! How could you honestly say you don’t want that? We can get a fancy house, a fancy car… I’d get a kick-arse boat with a crew!’

‘It’ll just cause problems. And it’s not like I’m unhappy right now.’

What would it be like to win 70 million dollars?

Bill puts down his pen for a moment, leans back in his chair and folds his hands behind his head.

‘For one, I’d buy us a massive house. Big enough for us and Baby Prince G and all the dogs you want. On the waterfront.’

I shrug. ‘Crime’s pretty high there. We’d have to start locking the front door. And a big house sounds hard to clean.’

‘We’d get a cleaner! And a security guard. Hell, we’d get 5 security guards! And a black Mercedes C63, but I’d never have to clean it either ‘cause I’d get a car man to look after it.’

I take it this Mercedes C63 has room for the Prince G’s car seat?

‘Hell no! Babies aren’t allowed in the coupe! He can come in the Lamborghini. A yellow one. He’d like that. But that would be for Sunday drives only… it’d be too nice to park in town. So we’d need a round-the-town car.’

He picks the pen up again, and goes back to marking off numbers.

‘There’s no way you’d be happy with a cleaner. They’d never do a good enough job.’

‘That sounds painful. It’d be a fulltime job just doing that!’

‘Think of all the awesome holidays and parties we’d have. We could tell everyone to come away with us for a week on our yacht!’

‘They’d have to find babysitters and get time off work… that wouldn’t happen.’

I feel tired just thinking of all the responsibility. I feel pretty tired to start with. I suspect Prince G might be teething. And 70 million isn’t going to stop that.

Would I have to start wearing make-up?

‘I couldn’t be a passenger in a Lamborghini dressed like this?’ I look down at my baggy pajama pants and Bill’s old t-shirt.

I shudder at the thought of having to move my personal appearance up my ladder of priorities. You could say I like my comforts.

‘You see Bill, money would not make me any happier. And that’s the goal here, right? I have everything I could possibly need, right here. A nicer house and a few more holidays would be good.’

But it’s not like they’d make me significantly happier.

I have an idea. ‘In fact, what’d make me happier is donating 65 million to charity and helping thousands of people instead.’ The other 5 million I could handle without having to hire staff or alienate my friends.

To say we have differing thoughts on charity donations is an understatement. 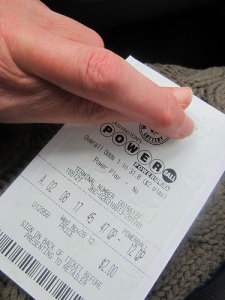 ‘But Kitty,’ he says ‘the best thing of all is that we’d never have to work again!’

I put my elbows on the table and rest my chin in my hands. ‘I reckon I’d keep working. I like my job.’

I almost see the steam rise from Bill’s ears.

‘Now that,’ he says, ‘is the most ridiculous thing I’ve ever heard!’

He grunts and throws the pen down on the table with a clatter.

‘It doesn’t matter anyway. We didn’t win a thing.’

But I don’t tell him that. I’ve stirred him up enough for one night.

I simply stand up, kiss him goodnight on the forehead and head off to bed.

Filed under BLOG: The Duchess of Charlestown