I was thrilled to see Bill Bryson on the 100 book challenge list as he’s one of my favourite authors. 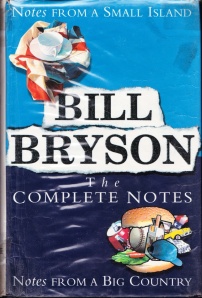 In saying that, I was surprised to see that they’d chosen ‘Notes from a Small Island’ as the book on the list. I started reading it a few years ago and lost interest, preferring to read his European adventures book (Neither Here Nor There) or the American counterpart (Notes from a Big Country).

I mean, really, what does the UK itself have to offer?

Sure, London’s pretty neat and Stonehenge can be impressive (for the first three minutes at least) but I always saw England as a travel destination from which to take other trips to more exotic places like Prague or Barcelona or Amsterdam.

Could someone really write a whole 265 pages on the England, Scotland and Wales alone?

Because it was on the list, I had to give it ago.

Bryson’s clever wit and superb ability to point out the ridiculous had me smirking to myself throughout most of the book. He decides to do the trip because he’s about to move his family from the UK to America and feels he needs to give one last hurrah before leaving. He starts his journey in France, crosses the channel by ferry to Dover, spends a few days in London, then zig-zags his way across Wales and all the way up to the northernmost tip of Scotland.

The thing I loved about this book is that he travels to the small, bizarre and most non-touristy places in the country. He opened my eyes to a lot of places I would have never considered: the Dorset coastal walk, Retford, Halkirk. Although the usual guidebook wouldn’t bother to mention half these places, Bryson talks of them fondly (or at least points out their serious flaws in a fond manner).

Underlying the facts and travel experiences is a sad tale of how the UK is changing, becoming more modern and big city driven, losing its historic charm and killing the smaller villages. And what’s even sadder is that this was written almost two decades ago (1995) making me wonder just how much it has worsened since then.

However, Bryson succeeded in making want to see more of the UK. I no longer view London as just a stopover point to Berlin, Paris or Budapest… my next trip to Europe (get ready to gasp) could very well exist of a stay completely on the small island.

And I bet Bill Bryson would be very proud to hear that.

In July 2014 I set myself the challenge to finish 100 must-read books before I die. For my ongoing tally click here.